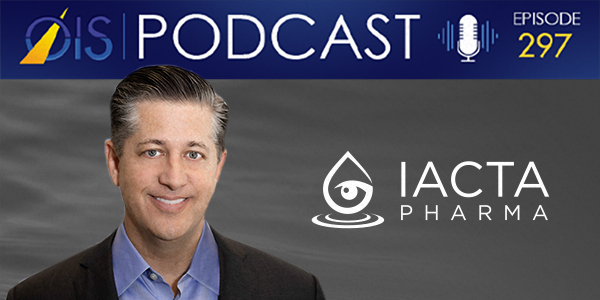 Listen to the podcast to learn more about:

• Details behind the IC 265 platform and what makes it a tolerable anti-inflammatory
• The mechanism of action behind IC 800, in development with Pharmaleads, and the formulation progress made to date
• How Damon’s legal career led him to general counsel roles at Roche, Allergan and Scilex
• The sage advice Damon received from a colleague that prompted him to assemble a top-drawer leadership team

Damon Burrows isn’t a scientist. And he didn’t start IACTA Pharmaceuticals, an early stage drug development company, because he believed his discovery could change the world.

He founded IACTA because he was free. Free from his role as general counsel at Scilex Pharmaceuticals. And free to bring life-changing ophthalmic therapies to market.

When Scilex merged with Sorrento in 2019, he and a team of executives from Allergan, where he previously served as VP, associate general counsel, moved away from big pharma to focus on innovation. Early on, IACTA partnered with Ora, which gave it depth of reach in asset identification, while the powerhouse executive team he selected helped move those assets forward.

The newest addition to the IACTA family, IC 800, an ocular pro-wound-healing analgesic, is already causing a stir in the eye care community. The drug system is based on DENKIs (dual ENKephalinase inhibitors), which aim to protect pain-inhibiting enkephalins from degradation. When enkephalins concentration increases, a physiological analgesic effect occurs.